Posted on November 10, 2015 by Insurrection News 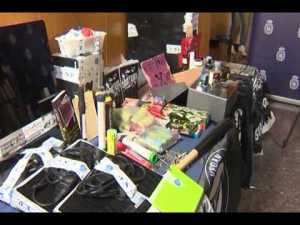 On November 04, 2015 the Spanish police launched a new repressive operation against the anarchist movement code-named ‘Operation Ice.’ Five comrades from the Straight Edge Madrid collective were arrested on charges of belonging to a criminal organization with terrorist aims, advocacy of terrorism as well as a number of incendiary attacks against banks and corporate targets in Madrid and Bacelona.

During the raid police are alleging that they found material used for the construction of incendiary devices. In the photos released to the media by the police of materials seized during the raids there does not appear to be any solid evidence of this. The photos mostly show the type of things you would expect to find in the homes of a collective that organized concerts and events – t-shirts, fanzines, records etc. Also on display in the police photos are nails and what appear to be power-cords and other odds and ends – hardly conclusive proof that the comrades were constructing incendiary devices.

After being detained in police stations the 5 comrades were taken to Central Court Number 3 of the National Court where Juan Manuel Bustamante Vergara and Borja Marquerie Echave were ordered to preventive detention while the other comrades were released on bail of approximately 20000 euros.

The authorities are alleging that Juan and Borja are the ‘leaders’ of the group.

Meanwhile the Straight Edge Madrid collective announced via a Facebook post that they have dissolved the collective due to the police repression and have cancelled all upcoming concerts and events they had been organizing.

Internationalist anarchist solidarity with Juan and Borja and all comrades facing repression from the Spanish state!