Posted on February 1, 2017 by Insurrection News 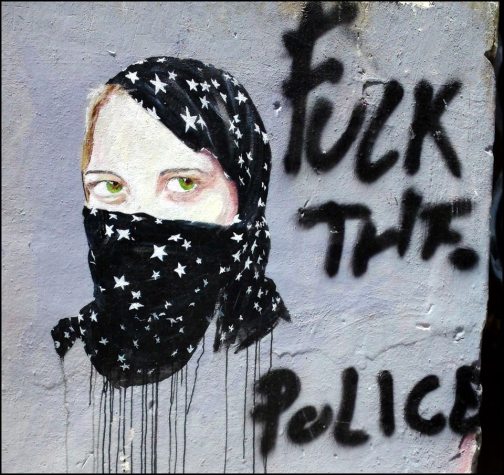 Careful who you call comrade!

Tuesday, 24 January, on the outskirts of Vigo (Mos), a deployment of about 60 armed men between the Guardia Civil and secret agents, searched (and almost destroyed) the house where Gabriel Pombo da Silva had lived for a few months with his partner Elisa Bernardo. At dawn the two were violently awakened, handcuffed and separated … aim: to find firearms and explosives! The search lasted about eight hours and in spite of the means employed (dogs and high technology radar tools), gave no results … among the things seized there is the usual “interesting” anarchist material, cameras, maps of various cities, some cable and old malfunctioning cell phones.

While Elisa, despite the repeated threat of being placed under arrest unless she revealed the much desired hiding place, remained free, Gabriel was arrested on charges of “illegal possession and trafficking of weapons and explosives and armed group”. During the 24 hours’ detention (the release of the comrade happened, in fact, the next day) the facts were bitterly reconstructed.

About three months ago the couple got to know a self-proclaimed anarchist comrade who, during the few opportunities to meet, “confesses” her problems with drugs and a conditional sentence she is doing because of an arrest suffered in 2013 on charges of being the author of an attack with Molotov cocktails on an institution in Vigo. Heart in hand, Gabriel and Elisa, respond to the request for help from the “comrade”, accepting her for a week (at the beginning of the year) in the aforementioned house to accompany her in the worst phase of a path of detoxification. After this brief period, the girl returns to her own home … reappearing as informer (of false information) the day prior to the present named “Operación Buyo”.

If we had not received certain news that during her previous arrest she had defamed other people, we would have limited ourselves to considering her a “victim of the system”, but that is not so. Maria, this is her name, is currently in jail on the same charges as Gabriel, probably hoping that being the daughter of a military leader can help her to avoid the worst since an arsenal of firearms was found at her home. In 2013, in fact, despite the charges of terrorism, one saw the sentence being reduced significantly (from 11 to 2 years !!!), then converted to parole, with her remaining imprisoned not more than a few months. With all the hatred toward the repressive system, prison and the judicial system, it is inevitable to wonder since when do those who claim themselves as anarchists receive such treatment. Each to their own conclusions.

Gabriel, for now on bail and under investigation … comments on this latest repressive operation thus:

“Inside as outside” one palpates this reactionary arrogance against who never resign themselves. You see that the pigs of every race and condition need “additives and dyes” to sweeten the whole “reality” that is inconvenient to them.

“Journalists” more concerned to sell their printed shit than verifying the veracity of what they publish. “Police” more interested in organizing speculations to prove their hypotheses.

What is really “surprising” (or who knows not), is that since they let me go (not to mention all that this tremendous affair contains) there was more “protection” in “Judicial Power” than within the so-called “libertarian movement”.

Since 2012 there are already 3 “Operations” (Ardire, Scripta Manent and “our local” Operation Buyo) against me.

In Italian ” buio ” means” dark … and yes …” dark” is this whole operation in which a “girl” (with a dark past) approached with the question of being a “comrade” to then want me stoned alive. Those requesting information on this “girl” can read the following links and answer for themselves. I am neither a judge nor a prosecutor.

In relation to the shit about the “training ground”, the “terrorist cell”, the “possession of weapons” and trafficking of the same … well … I think the facts belie all. However I understand that in this alienated society and this corrupt system it is preferred to speak / to lie about the underlying causes of poverty than watch one’s own navel.

I’m still standing. I continue with my anarchist path despite all and everything. They will never be able to stop the Agustin Rueda University, that I am going to inaugurate in my parents’ house in the country there in Mos, with this kind of maneuver.

In my house were seized: 5 winter cabbages, anarchist books and magazines. It is obvious that if they had found even one nail clipper in my possession, Gabriel Pombo would be writing “communiques” from a cell and not in freedom.

To those who continue to support me and show me their unconditional love: I’m here!

To those who continue to want to assassinate: I’m here!

For Anarchy and the end of domination!

(Translated by Act For Freedom Now, via Informa-Azione)