Argentina: Freedom to the Anarchist Prisoners in Buenos Aires!

Posted on February 2, 2018 by Insurrection News 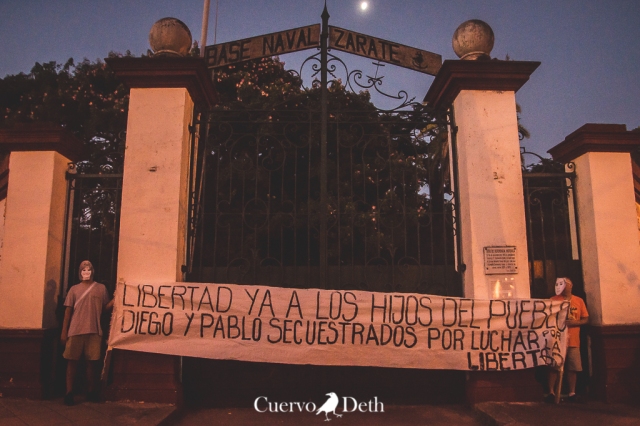 Artistic intervention and anarchist protest at the door of the naval prefecture building in Argentina in the city of Zarate for the two months of the murder of Rafael Nahuel, the disappearance on the part of the state of Santiago Maldonado, the murder of Luciano Arruga and the political prisoners of December 14 in protest against the labor reform.

In these last weeks in Argentina the sessions were given for the provisional reform, which hurt the pensions and other economic characteristics of the most vulnerable families, the people came out to demonstrate crossing with serious repressions and security operations, last Thursday 14/12 the deconcentration of one of the manifestations chased police and arrested four fellow anarchists, among many others, that turned out to be 45 detainees, with the cause of “intimidation publishes” unjust and unjustified way, I spent a week of this, the Bonadio judge, responsible for arbitrary arrests, still detained in an unjustified way to three anarchist comrades, in common prisons, and not alleging grounds of detention, in the background is an ideological persecution, we ask for the solidarity of all the comrades of all world to spread the case and demand the early release of Diego, Pilar Diaz, and Pablo, enough of the criminalization of the protest! down the labor reform! freedom to the anarchist comrades! above those who fight!