Posted on March 7, 2018 by Insurrection News 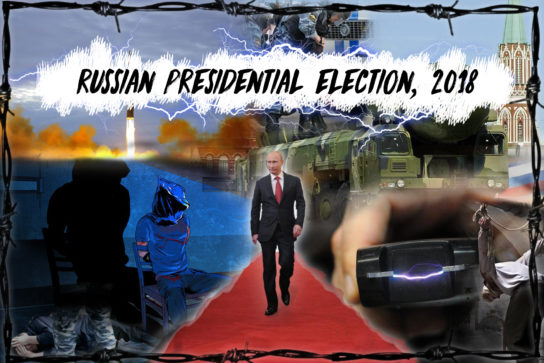 It will be the next Putin election on March 18. Inauguration rite on the reelection will take place in conditions of domestic terrorism and nuclear war threat. Russian security service has started mass repressions against all the dissenters with the regime, exerting unprecedented pressure for every dissident from liberal opposition movements to the anarchists.

Federal Security Service (FSB) conducted a series of arrests and raids on the homes of known anarchists and antifascists in Autumn, 2017. Six anarchists from Penza were arrested and charged with preparation of a coup d’etat. The only evidence of “preparation” was the fact that all the detainees had played airsoft. During several months the detainees were exposed to everyday tortures, until they pleaded  guilty.

Two anarchists were arrested in Saint Petersburg in January 2018. They also were exposed to the same tortures as Penza anarchists. Officers made them learn the confession and repeat it to the  investigator. One of the kidnapped anarchists, Victor Filinkov, was taken to the forest where he was put to tortures. Ilya Kapustin was also arrested and exposed to racks, he did not make a confession, so they nominated him  a “witness”.

A lot of raids occurred against Crimean anarchists and socialists in February and March. The first of detainees was Eugenie Karkashev. The reason for the arrest was a conversation in the social network “Vkontakte”. A month later, the mass raids took place against the other anarchists and communists of this peninsula. The list of detainees in the Crimea includes anarchist Shestakovich and communist Markov, who were arrested for 10 days.

Then, Moscow anarchists Kobaidze and Gorban were arrested and accused of a rout of the ruling party “Unified Russia”. Officers refused to admit the lawyer to the detainee, until she pleaded guilty. They violated all the rules of law.

Three anarchists together with their friends and relatives were kidnapped by FSB in Chelyabinsk. They also were exposed to tortures with electric current. It was done in order to get from them necessary testimonies and make them admit their participation in the action of banner posting against repressions.

President Putin personally gave the order to “deal with”  the protest speeches and “organizers of unauthorized street actions” on the speaking engagement of collegiums Ministry of Internal Affairs (MIA). Our authorities are so unsure of themselves that they resort to the terror, abductions and tortures, finding the threat in any street protest.
At the same time, protest and maximum publicity of these events really can be of help to anarchists who are staying in prisons. There had not been any information about Penza anarchists and this enabled FSB  to put them to tortures for a long time. Saint Petersburg prosecutor’s office was forced to check  the statement of Victor Filinkov’s tortures only after the international campaign in February 2018. Remember that today’s silence and inactivity doom us to tomorrow’s arrests and abductions.

So, in the week before the Putin election, March 11, we call you to pay special attention to the conditions of terror, in which the election is held. Today, hangmen and terrorists want to be “elected” for the new term. And all of us can see what this election is. Now we can draw public attention (Russian and international), limit the scope of terror today and postpone its beginning tomorrow. Only public pressure can hinder state terrorism. We are calling for action. Evenings of solidarity, street agitation, spread of information, performances or rallies, everything for what you have power and fantasy, everything that could draw attention to the lawlessness, everything won’t be in vain.

Putin’s new term is a prison term for every Russian.

Requisites for help to repressed anarchists and addresses for letters: naroborona.info/2018/02/13

Note from Insurrection News: Articles in English about recent cases of Russian authorities repression and torture against anarchist and antifascist comrades…

Article about two anarchists tortured by the FSB in Chelyabinsk
https://www.opendemocracy.net/od-russia/yegor-skovoroda/chelyabinsk-anarchists-tortured

Antifascist Victor Filinkov talks about how we was tortured by the FSB
https://www.opendemocracy.net/od-russia/viktor-filinkov/fsb-officers-always-get-their-way