Canberra, Australia: Disruption of Parliament and Banner Drop in Solidarity with the #SuperGlue7 Defendants 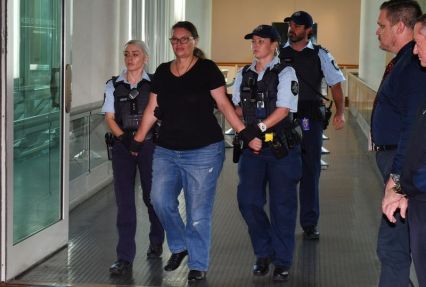 Early on Wednesday March 28th, a banner reading “Close the Camps, Open the Borders” was dropped from the Commonwealth Bridge in Canberra, the capital city of Australia. Flares were let off to highlight the action.

The action was taken in solidarity with the ‘Superglue 7’ who are on trial in the Supreme Court this week. The Superglue 7 are members of Whistleblowers, Activists and Citizens Alliance (WACA). On November 30th, 2016 they travelled with 50 other members from across Australia to Canberra. They all went to Parliament House where they disrupted Question Time from the public gallery. They called for an end to Australia’s inhumane policies that are in breach of UN Human Rights Conventions. The Superglue 7 glued their hands to the balustrade in the public gallery. The group used a ‘mic check’ speech to demand that the government closes all refugee detention camps and that detained asylum seekers be safely resettled. As a result, the seven were charged with intent to damage Commonwealth property.

Several other protests in support of refugees and in solidarity with the accused have occured in the nation’s capital over the past three days. On the second day of the trial, other activists interrupted Question Time again. They stated that they refuse to be complicit in the government’s human rights crimes against refugees. No superglue was used and all of the protesters were released without charge.

A spokesperson for the group said “while asylum seekers and refugees are held indefinitely in appalling conditions, people will continue to fight against bipartisan policies of cruelty that are Australia’s shame. We will not stop until there is justice for refugees”.